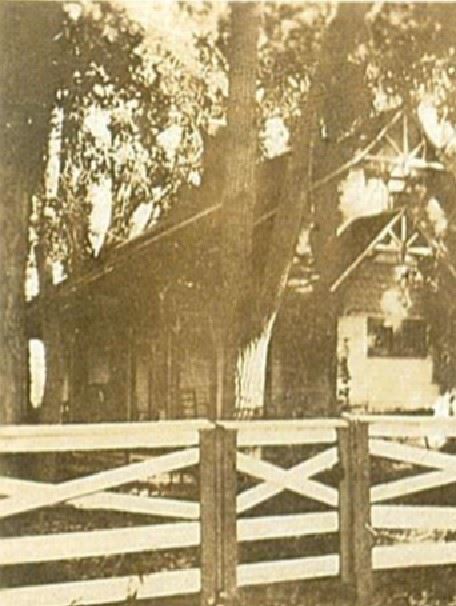 In 1883 Emmet Bromley purchased 200 acres across from what is now South 15th Avenue and Bromley Lane in Brighton, Colorado. The farm expanded to upwards of 1,100 acres extending 1¼ miles to the east and 1 mile south from present day Bromley Lane.

During the Bromley era, the property was used mainly for ranching with cattle, sheep, and horses. Emmet Bromley became one of the largest livestock ranchers in Colorado, grazing his cattle as far as Barr Lake before 1900. He is said to have spent a considerable amount of time improving some of the best breeds of cattle and Cleveland Bay horses. Emmet also raised field crops, planted orchards of black walnut and orange trees, and tended vegetable gardens. During Bromley’s time there is evidence that the farm property was populated by an abundance of large cottonwood trees shading the house and creating formal rows lining the drive entering the property. It is likely that the family planted other ornamental plant material and gardens around the main house perhaps for decorative purposes and to grow a variety of vegetables for family consumption. Through oral history it has been learned that there was a formal garden on the east side of the house for entertaining. An ornate white-painted wood fence surrounded the main house

Emmet Bromley’s influence on the landscape extended beyond his homestead. Bromley served as president to the German Ditch and Reservoir Company, secretary of the Fulton Irrigation and Brighton Lateral Ditch companies, and was involved in oil development, serving as president of the Gibraltar Oil Company. While in the State Legislature he worked to simplify and liberalize water rights laws and was continually a strong advocate for farmers and ranchers around the state. Also, while in the legislature, Bromley helped craft bills that separated the northern part of Arapahoe County into Adams County, and named Brighton as the County seat. Emmet Bromley is known as the “Father of Adams County” because of his efforts. Emmet Bromley died in 1922.His family relinquished the deed to the property to the Public Trustee in 1926.It is presently unclear who owned the property and how it was used between 1926 and 1935.Like many other agricultural properties in the area, it may have remained under public ownership during the Great Depression and Dust Bowl years. Further research in the Adams County Courthouse may shed light on this question.

The I.B. James /Roberts Era
The National Register nomination states that the William O. Roberts family owned the farm after the Bromley family.However information obtained later shows that the Roberts family managed the farm, but did not own it.In 1935, I.B. James purchased 160 acres of the farm. In the 1930s, several different members of the James family purchased numerous parcels of agricultural land in Adams County, totaling thousands of acres.Most of the parcels they purchased had been in Public Trustee ownership.

I.B. James owned the Burlington Bus Company in Illinois, a subsidiary of the Burlington Railroad. James was one of the founders of the Trailways Bus System, a conglomeration of smaller long-distance bus companies who banded together in the 1930s to compete with Greyhound. I.B. and his brother built the Grand Lake Lodge near what is now Rocky Mountain National Park. Trail Ridge Road, completed in 1932, greatly increased tourism to that area. I.B’s brother took over the lodging side of the business and I.B. kept the tourist bus business. The James family envisioned a Grand Circle tour of the Rocky Mountains utilizing a combination of train and bus segments. Brighton was at the junction of the Denver Pacific Railroad (now Union Pacific) and Denver and Boulder Valley Railroad, and tourists actually did ride the train from Brighton to Boulder, from whence they were bussed to mountain towns. There were plans for a resort community on the west side of Barr Lake, but they never materialized. It seems likely, but has not yet been established, that the James family’s extensive purchases of foreclosed agricultural properties in Adams County were intended for this resort development. Further research in Adams County records will help to close this information gap, and determine whether the Bromley farm was intended to be part of the envisioned resort community.

In 1935, I.B. James hired William O. Roberts to farm and manage the former Bromley farm, with the first crop year in 1936. The crops that were grown during the Roberts era consisted of sugar beets, alfalfa, corn, grains, and at one time a large field crop of tomatoes was also grown to the west of the barn.

In addition to the fertile land for harvesting these crops, the Roberts family raised hogs along with dairy and feed lot livestock. The farm consisted of 160 acres during this period, with the majority of the land under irrigation from 40 shares of water owned by the farm, and provided by Fulton Ditch Company. Frank E Roberts, son of William O. Roberts, lived on the farm from 1936 - 1946. In 2007, he described the farm complex as having:

“…many beautiful white buildings in 1936. Concrete walks connected each of the buildings related to serve the house. A large expanse of fenced blue grass surrounded by large cottonwood trees added beauty to the north side of the house. A long entry lane from the county road was lined with more cottonwood trees, separating the house from the outer buildings. Trees were evident in the field along the irrigation ditches and other areas providing shade and beauty to the farm.”

It should also be noted that motorized farm equipment was still in the development stages around 1935 and the fields were still tilled and plowed with draft horses and mules.The Roberts family built additions to the farm complex around the barn, including livestock corrals adjacent to the barn, and a large feed lot near the silo (below). The farm again changed owners in 1947 when the Hishinuma and Koizuma families purchased it for about $40,000.

The Koizuma-Hishinuma Era
The Hishinuma and Koizuma families bought the property in 1947. These two families had a deep agricultural past, farming the Barr Lake and Ft. Lupton area before relocating to the Brighton area. O.E Fink of the Blaney Cannery may have brought the Hishinuma-Koizumas to Brighton to produce crops for his canning operation, He probably provided both the seed and the machinery to grow these crops.

There is a rich Japanese-American agricultural history in Colorado. The leadership in the state allowed Japanese-Americans to own land during a time when many Americans had deep suspicions of the Japanese, due to the events surrounding the attack on Pearl Harbor. These Japanese-American families played a vital role in the production of crops for the local canneries.

The Hishinuma and Koizuma families raised a variety of crops including sugar beets, cabbage, alfalfa, and corn. The families also grew tomatoes, cucumbers, pickles, lettuce and cantaloupes for personal consumption. There is historic photographic evidence that much of the vegetation, including the grand cottonwood trees that were on the farm during the Roberts era, existed when the Hishinuma-Koizumas first settled the farm. However, at some point all of the trees were cut down. There is also photographic evidence that the family may have planted a variety of shrubs and other plantings around the main house.

After the deaths of the patriarchs of the Hishinuma and Koizuma families the land was passed on to the Hishinuma children. They maintained control of the property until 2006. The City of Brighton purchased the property in November 2006 to save the farm structures from demolition by a developer.